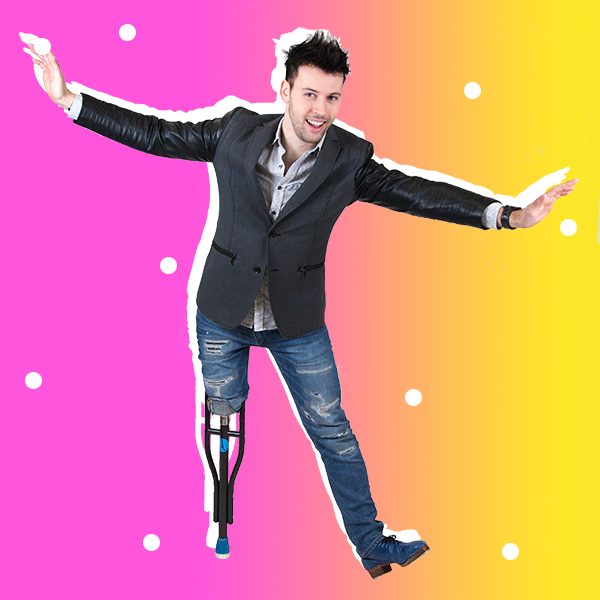 Evan Ruggiero began dancing at the age of 5 in his hometown studio. By age 10, he was accepted into the famed New Jersey Tap Ensemble, under the direction of Ms. Deborah Mitchell. Not long after, Evan graced the stages of Lincoln Center, The Shomberg Museum of Harlem and The New Jersey Performing Arts Center in Newark, among others.

During his sophomore year at Montclair State University, while pursuing a Bachelor of Fine Arts in Musical Theatre, Evan was diagnosed with Osteosarcoma, a rare bone cancer, in his right leg. After enduring nine surgeries in a six-month period in an effort to save the leg, the cancer returned more aggressively than the original diagnosis. He was faced with the ultimate decision of amputation in order to stop the cancer and save his life, as well as undergoing chemotherapy for 16 months.

Despite the physical setback, Evan held close to the dream of dancing and learned of the famed Clayton “Peg Leg” Bates, a legendary African-American entertainer who taught himself to tap dance after losing a leg in a cotton gin accident at the age of 12. Bates performed twice for the King and Queen of England and became a regular on The Ed Sullivan Show appearing a record 58 times. Inspired by Clayton Bates’ story, Evan aspired to follow in his footsteps.

Within eighteen months after the amputation, even designed a special prosthetic “peg leg” that would allow him to keep dancing. And like that, Evan was tapping again. Theatre/Film/Television/Dance credits include: St. Louis Tap Festival, LA Tap Festival, Princeton Symphony Orchestra Soloist, American Idol, The Ellen Show, Telemundo’s Un Nuevo Dia, NYC workshop PANIC! The Musical, Tap World (Film), Quelli Che il Calcio in Milan, Italy (RAI), Paint The Universe (Transcendence Theatre Company), Man Of La Mancha (Pittsburgh CLO), and most recently performing as a soloist at The Kennedy Center in Washington D.C. Evan also has his own one man show called “The One-Legged Song and Dance Man,” which he regularly performs at 54 Below, NYC.

Evan’s life-long dream to dance, sing, act and entertain and his incredible determination have given him the opportunity to perform in places many dancers can only dream of! Clearly, he is an amazing teacher and an inspiration to us all. We’re so lucky to get to dance with him at Showstopper dance conventions!

Check back later for an exclusive look at Evan’s dance competition showcase!

Pink is STILL Trending: Here’s How to Wear This Showstopping Hue

This is the first “Dancing with the Stars” Disney+ Cast

10 Things Dance Taught Me About Life