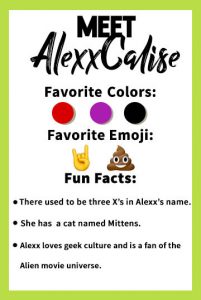 If you have ever heard or, even more likely, danced to the soulful rock ballad “Cry,” then you know about talented musician Alexx Calise.  Alexx is a rockstar, a solo act, a face painter, and a hair color enthusiast, but more important than that is the way she has touched dancers everywhere through her music and through the reality TV show Dance Moms.

Growing up in a musical household with a guitar playing father, music was always a big part of Alexx’s life. “A writer first and foremost,” Alexx brought her writing to life using her guitar to enhance her already powerful words. The important thing to her was that she loved what she was doing. It meant something. Little did she know that one day her songs would lead her to be an inspiration to dancers and that she would even become a bit of a dance enthusiast herself.

“Music seemed like it was in my blood and bones.”

You wouldn’t guess it listening to her music, but Alexx Calise’s impact on the dance world all happened by accident. Alexx uses a licensing agency that places her music online and in TV shows, and it just so happened that “Cry” ended up on Dance Moms during one of Maddie Ziegler’s dances on Season 1. When the song hit screens with the matching footwork of Sia’s future favorite dancer, Alexx had no idea. Licensing agencies place musical material, but they don’t notify the artists every time a song gets used, so she had to do a bit of investigating. She found that kids were covering “Cry” on YouTube after seeing it on Dance Moms. Since then, the song has taken off, and it has been featured in routines across the dance world. This was just the first step toward Alexx’s involvement with dance and the cast of Dance Moms.

“It’s really funny because I am the world’s worst dancer.”

Since that Season 1 feature, Alexx has had ten songs on Dance Moms, and she has even performed on the show with Maddie and Showstopper Sparkle Society member Nia Sioux who sang back up vocals. This was the start of many friendships for Alexx. She is now good friends with all of the cast members. Nia and Maddie have even been featured in Alexx’s music videos. Maddie dances in the music video for “Cry,” and Nia sings back up vocals and dances in Alexx’s latest music video for the song “Breathe”

What seems to be really important to Alexx is not that “Cry” took off. She says that she is happy to see any of her songs make it out into the world. “Cry”‘s influence brought her into a world that is “art on top of art.” Seeing dancers perform and even having them perform to her deeply emotional and beautifully written songs has given her a deeper appreciation for dance in music.

“Dance and music are synonymous.”

Alexx doesn’t only show up on the occasional Dance Moms episode! She spends a lot her time working on her solo project, writing the pop-alternative music we can’t get enough of, but Alexx is a rockstar at heart. Her other project is a rock band called Batfarm that she does live performances with (and occasionally tours!). She finds that the live end of her musical ventures is more fun, but as long as she is writing at all she is happy.

Like anyone in a passion-based career, Alexx isn’t just her music. She is the creative owner of a kid’s party company, doing face-painting and balloons and throwing princess and clown parties – clearly, we need her to plan our next dance party.

Talk about multi-talented! She also indulges in what she refers to as her “morbid curiosity” – acting. For Alexx, music is a career, but acting is more of an intense hobby. She does it because she can and because she loves it, but music will always be her main venture. She is part of a pilot for a show called Girls Gone Geek and has done car commercials and commercials for Guitar World (Of course she has! She’s a rockstar!).

Oh, and in case you hadn’t noticed, Alexx is practically a chameleon with her multi-colored hair. You might know her for the deep maroon color in the “Cry” video, but she is currently rocking green. She has dyed her hair pretty much every color you can think of except for yellow and orange!

She doesn’t label herself as a role model, but it is clear to us that she most certainly is one. In all of her music, Alexx tries to illustrate the purpose of being yourself. She wants others to see the value in standing up for yourself and being yourself no matter what other people might think.

Today, there are lots of reasons why girls might feel like they can’t do what they want to, or that they can’t succeed in accomplishing their creative dreams. Because of this, Alexx is glad to see girls like Nia and Maddie take the spotlight for lots of young girls. She thinks that it is important for girls to look up to people with substance – nice, positive young people like Maddie and Nia. This can be harder than it seems in an age when the most talked about people are the Kardashians. “What do they do? They’re just famous for being famous. Look toward people like Maddie and Nia who work hard and work their butts off.”

Do It Because You Love It

We had to ask Alexx what she thought of creative careers and what it takes to make it. For her, working in music or acting or dancing isn’t a job. It is passion and a lot of hard work. In the end, she thinks that you should strive toward the things that make you happy, and if you want to work in something that requires talent and skill, you, above everything else, have to love it.

As an artist and a person, Alexx Calise is one of the best role models a girl can have, and if you are looking for a song to dance to, she definitely has you covered there, too.

Biletska’s “Obstacles” is a Song to Get Lost In