NFL cheerleaders are the backbone of any football team. They bring you sass, class and killer half-time routines. Any dancer who watches a game lives for the moments when ESPN shows off the pretty girls dancing their hearts out in their sparkly costumes.  So what does it actually take to make an NFL team? Some may think that it’s based solely on looks, but we’ve learned that theory is completely untrue. Sweat, preparation and determination are just part of what it takes to make it in the world of professional cheerleading and we were lucky enough to get the inside scoop on one young lady’s journey to becoming a Ben-gal (Cincinnati Bengals Cheerleader). 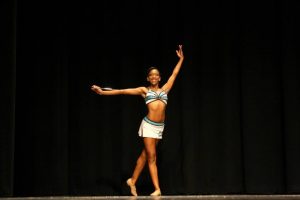 Renee Williams is her name, and according to her, she has been working most of her life to make a team like this.  Renee has had her fair share of auditions throughout her career, she has been a member of numerous dance teams and definately isn’t new to the football field. While in college, she was a member of the Coastal Carolina University Twirlers, a dance and baton twirling team that performed at football games! 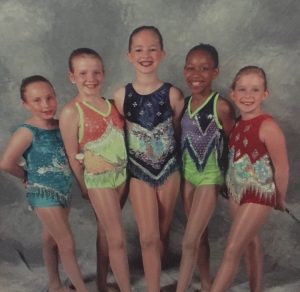 Why do you love dance?

“It has been 20 years since I began my dance career!  At age 4 I started taking ballet and gymnastic classes and then joined my first competitive baton twirling team at age 7 and continued dancing through college! The memorable experiences and opportunities that I have gotten through dance and baton are why I love it so much. My coaches and teammates along the way have become like family to me!” 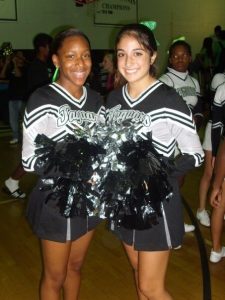 What made you decide to tryout?

“I have always wanted to audition for an NFL Cheerleading team but I was never in a place where that was possible, I love the atmosphere and excitement of football games! After recently relocating to the Cincinnati area I wanted to stay active and get involved and after doing some research about the Ben-Gals Cheerleading team I knew that this was the time for me to jump at this opportunity!” 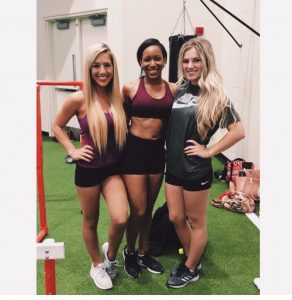 How did you prepare?

“I prepared for the audtion in a few different ways. The Ben-Gals offer optional preparation classes and a master workshop about 6 weeks prior to the first round of auditions. These classes gave dancers a preview of the NFL Cheerleader style of dance, glam requirements and what the coaches/judges will be looking for in the final round of auditions. I took advantage and attended every preparation class and felt it was a huge help to get me where I needed to be for finals. Another resource the Ben-Gals provided was their fitness and nutrition trainer. I met with her over 6 weeks prior to auditions as well as through finals. She really taught me how to eat healthier so that I can be physically healthy and ready for the workouts that are required of NFL Cheerleaders.”

“There was a lot of excitement, nervousness and emotions throughout the audition process. The first round started on a Monday evening and there were about 70 girls who came to audition. The captains taught us a quick routine and we had about 30 minutes to learn it. Thereafter, we were paired up and performed the routine for the coaches. Once all of the groups had gone, we were all called out and the coaches read off the names of the girls who made it through to the second round of auditions. The second round was the next day and the rookies were joined by the veterans. We again learned a short routine that we performed in pairs for the coaches. A portion of this round also consisted of a skills test. We did not find out if we made it to finals that night, but through an email the following morning (well midnight but I was asleep so I didn’t see it until the morning lol). I believe there were 40 rookies and veterans who made the final round. We practiced all together for two weeks and learned our opening number dance and then the final audition dance! Also, during those two weeks, each dancer had a personal interview with the coaches. It was so much fun being amongst a great group of women all going after their dreams.”

How did you feel making the final round?

“Making the cut to finals was so surreal! I couldn’t believe I was one step closer to my dream! After finals were held, the decision on who made the team was in the judge’s hands. The coaches told us to expect a decision to be up on the website by the end of the week (finals were on Sunday). Of course that was the longest week of my life but I tried to keep busy so that I was sitting around thinking about it. Once Thursday rolled around, I was constantly checking the website but nothing was up. That night I got ready to go to bed and as I was falling asleep, I wanted to check just one more time.  When I hit refresh on the page I noticed that a new album was up and my heart instantly dropped! At the time I was too nervous to even click on it. Finally, I calmed down enough to scroll through the pictures and then I saw my own. I instantly started crying!”

How does it feel to be a Ben-Gal?

“It has been such an exciting and fun journey so far! We are learning our routines for game-day, learning about fitness and nutrition, getting tips on the do’s and dont’s of being an NFL Cheerleader and enjoying lots of team bonding. My goals for this season are to work hard at every practice and performance and enjoy every moment of this experience! I am looking forward to stepping out on the field on game day and doing what I love the most with my Ben-Gals sisters!”

When asked what advice she would give to anyone looking to take on the challenge of becoming an NFL cheerleader Renee says, “ALWAYS go for your dreams! You only have one life to live, so why not live it doing what you love and what makes you happy!”

Be sure to follow Renee’s journey on Instagram. We wish you the best Renee, and we can’t wait to watch you slay it this football season!