Home Showstopper A Look Back on Our Showstopping 2018!

2018 was Showstopper’s 40th anniversary. You might think after 40 years of dance competitions, every year would be all routine, but we strive to make each year more of a celebration of glitter and confetti and dancing than the one before. For our 40th anniversary, we took that attitude to the next level. 2018 was a year full of memories with you that we’ll never forget!

In 1978, before YouTube and Dirty Dancing💃🏼, Debbie Roberts knew that something was missing from the dance world🤔. She realized that dancers needed an exciting stage where they could do what they love, while also receiving feedback that pushed them to be their best🏆🎉🌟. That is how Showstopper, the world’s first dance competition, was born!💖⠀⠀⠀⠀⠀⠀⠀⠀⠀ Four decades into our dream, we still get goosebumps when a jazz group nails a combination😱, an urge to cheer when a hip hop dancer invents a new move💪🏼, and a lump in our throat when a young ballerina braves her first solo😍. We’ve been blessed for 40 years to be able to watch so many dancers grow up and continue doing what they love.❤️😊 ⠀⠀⠀⠀⠀⠀⠀⠀⠀ We are so excited to celebrate with you, as Showstopper's 40th Anniversary season has now officially begun!!🎉👏🏼💖⭐️🎂🙌🏼🏆 #showstopper40 #competitionseason #showstopperdancecompetition

We kicked off 2018 with confetti cannons and loads of glitter in preparation for our 40th anniversary season! 40 years is a big deal, and we wanted to celebrate all of those amazing memories with you!

Not only did we have an AMAZING Regionals in Anaheim this last weekend😍, but we also had our photo shoot for the next edition of our Showstopper Magazine… and it. Was. Fabulous!!👏🏼🙌🏼🎉💖 We can’t wait for everyone to see! Not to mention our NEWEST edition is NOW available in B&N's and will be available at all 630 B&N's and all Hudson News Stores in airports ALL ACROSS THE NATION!!😱 Make sure you pick your copy, because it is AMAZING!!💗🌟🌈 #goshowstopper #showstopper #showstoppermagazine

February was a busy month for us. The Spring 2018 issue of Showstopper Magazine hit the shelves at Barnes & Noble, Hudson News, and our competitions. Speaking of competitions, February marked the official beginning of our 40th season. With regionals underway, we introduced a brand new series to highlight some of our favorite teen dance news and highlight your incredible performances, The Glitter Drop! Oh, and how could we forget that our #ShowstopperFam on Instagram reached 50,000 followers!?

In March, Dance Moms‘ Lilly K taught us her signature move, the floor needle in a must-see tutorial video. Showstopper VIP got a fabulous new look, too, and celebrated one year of incredible dance news! 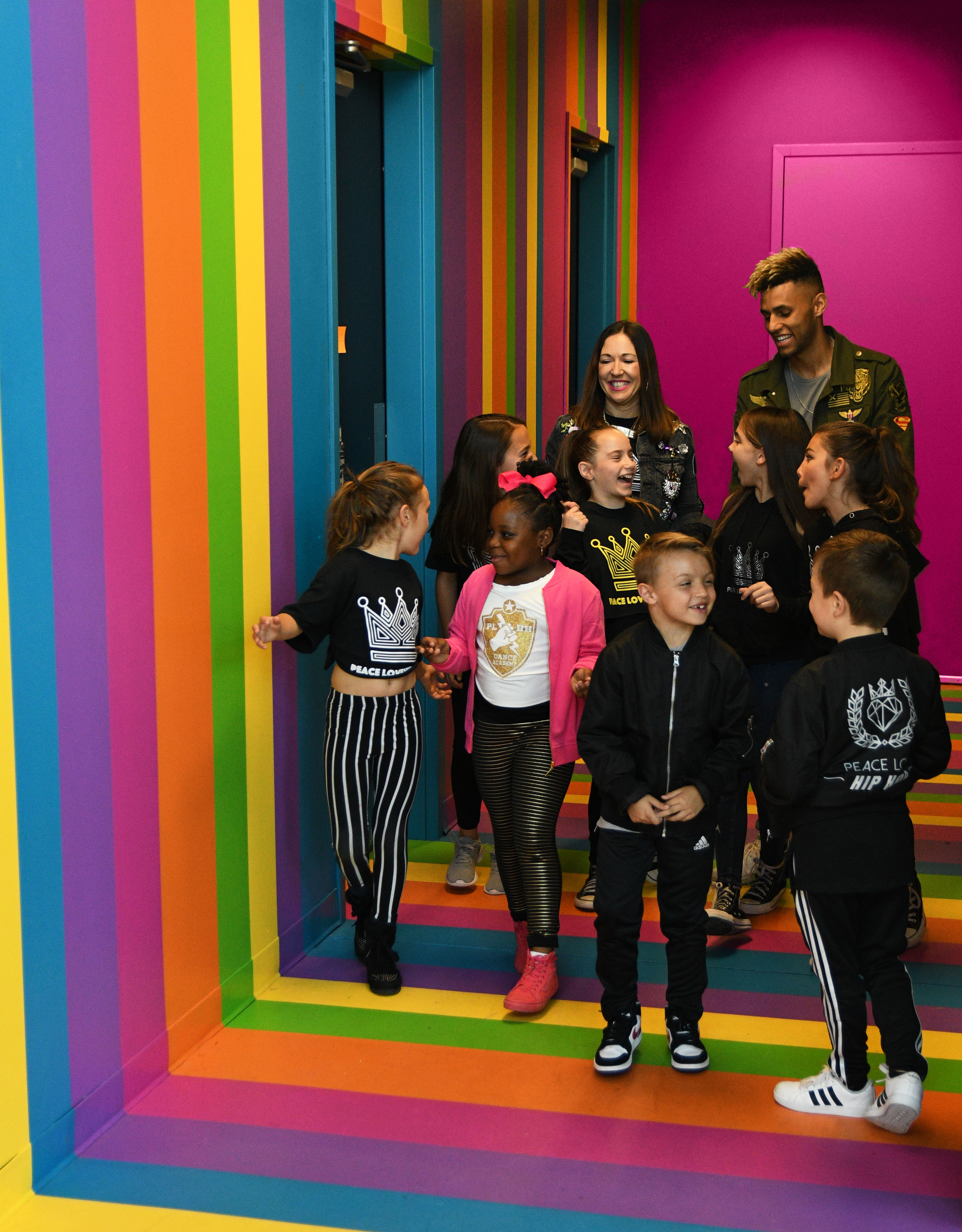 In April, we visited our friends Peace Love Hip Hop in Charleston, SC at their studio for a photoshoot! We couldn’t stop looking at the rainbow walls and the motivational quotes, but we managed to dance away with some incredible photos for Showstopper Magazine! We also celebrated Easter with Showstopper’s favorite Bunny, Ori, and hit the beach with some behind the scenes looks at our Myrtle Beach photo shoot.

2018 was full of photo shoots, and in May we had another one! This one took us for a walk on the wild side as we hung out with Bubbles the elephant, tigers, monkeys, alligators, and more! You won’t want to miss out on these safari adventures in the next issue of Showstopper Magazine!

Today is the first day of our new monthly fashion article series on Showstopper VIP with @christyisa_dance_princess lead dancewear designer at @royalcouturexo 😍😍👏🏼👏🏼 Christy Lyn will be using her fashion and design knowledge to give you the top tips for bringing together your love of dance and all the latest fashion trends🔥🔥 Read her first article about styling your fav leos for every day at www.showstopper.vip/christylyn-summer-leos/ 🌟🌟 #royalcouturexshowstopper

Showstopper Sparkle Society member and Royal Couture’s Lead Fashion Designer Christy Lyn joined the Showstopper VIP writing team. Now, every month she shares some of her dance-inspired fashion advice with us! The Summer 2018 issue of Showstopper Magazine also hit shelves, giving us an inside look at the lives of some of the most popular dancers in the world including Beyoncé’s dance captain, Ashley Everett. That’s still not all for our showstopping June, though. We also kicked off our 40th anniversary finals!

We could not have asked for a better 40th year of dance💗💗 The talent from dancers, teachers, and choreographers that we saw this season was too incredible for us not to share with you all!! Here is our first Showstopper Spotlight performance – West Coast National Championship in Teen Large Groups – “Over The Rainbow” performed by @yokosdance #showstopperspotlight

In July our finals season wrapped up with a bang with incredible moments and performances that took place all over the country. When we traveled to the west coast for our last finals competition in Anaheim, CA, we also met up with some of your favorite dancers for a Showstopper Magazine photoshoot!

We have announced our 40th Anniversary Giveaway winner!🎉🎉 Incase you missed it, you can still watch our LIVE Celebration Event on our YouTube, Facebook IGTV, and Showstopper VIP site!😊😊 As a thank you to all the studios that have supported us throughout the years, we wanted to give each studio that attended one of our 2018 National Finals the opportunity to win a new Jeep Renegade!💗💗 During the Giveaway Event, we gave a first-time tour of Showstopper's headquarters, highlighted exclusive Sparkle Society content, recapped our 2018 Finals season and more!🙌🏼 Thank you to everyone for an amazing 40th Anniversary season and congrats to our lucky winner!!🎉😘

After July, our 40th anniversary of competitions wasn’t quite over. We decided to end with an explosion of confetti, giving away a car to a lucky studio that competed with us during the season! But before that, there was a whole live stream to celebrate with including a tour of the warehouse and some highlights from the competition season.

September was a month for celebrating the start of convention season. We gathered up some of the best dancers in the world and brought their passion for dance and teaching to you! There were hugs all around, and we could tell you missed us as much as we missed you.

The competition was tough this year, but the votes have been tallied and we have a winner…. CONGRATS Jayleigh Hutchins- the dance trophy🏆🧡🏆🧡 You are this year’s most faBOOlous costumed creature👻🎉 Thank you to everyone who voted and participated in this year’s Halloween costume contest!😘👏🏼 @dancing_jayleigh #dancetrophy #halloweencostume #costumecontest

Even though October is the spookiest month of the year, we managed to make it faboolous with a little bit of glitter and a Halloween costume contest! Nothing makes fall better for us than seeing all of your incredible (and even dance-related!) costumes.

We are SO excited to be back in Houston this year!!😍😍 HOUSTON! Reserve your spot🔜 We will be at the Westin in Memorial City, November 16th-18th🎉 Registration closes November 7th🕙 SEE YOU THERE😘 #Houston #Texas #danceconvention #goshowstopper

November marked our glittery return to Houston after Hurricane Harvey prevented our dance parties and fun there last year. We’re glad to have our gulf coast members of the #ShowstopperFam back in our convention classes!

Happier than a kid in a candy store😍🍭🌈 We had the best time with these beautiful girls today!!😘💗 #goshowstopper #photoshoot #dancephoto #candystore

At Showstopper, nothing stops us from being as bright and colorful as possible. So, in December we planned a rainbow-filled photoshoot and even took five fabulous dancers to a candy store to get all of those sweet pictures you love seeing in your feed.

Alright, #ShowstopperFam! That’s a wrap on 2018. We’re diving into the new year feet first (ready to hit the dance floor), and we have even more incredible things planned. Stay tuned, you won’t want to miss a thing!

Missing the Showstopper Stage? These are the Things that Keep Me Excited to Go Back

The Latest Dance Competition Series is a Major #ThrowbackThursday Moment

Help Us Keep Our Dance Community Positive and Connected!

You’ll Never Believe What We’re Giving Away This Time

Veronica Good - April 16, 2021
"The best people are the ones who are relatable and true to themselves."

Allison Kimball is Staying Authentic and Motivated with Her New “Spiked...